Clean seas: A must for the sustainability of recreational boating

Almost exactly 3 years ago in May 2018, Peter Franklin was invited to attend the Marina High Tech show in the South of France, and whilst there he had a fascinating discussion with the team who were in the early stages of developing the Sea Cleaners Manta Project. When he came back, he wrote a blog about the project and its aims. In this article Peter gives us an update on the Sea Cleaners Manta Project, the efforts of the European Union (EU) on tackling marine litter and how local initiatives can inspire everyone with a boat to get involved in cleaning up the oceans.

After meeting the Sea Cleaners Manta Project team in France, I was very interested to join a webinar on cleaner seas and oceans organised by European Boating Industry (EBI), who have recently announced a formal partnership with the Sea Cleaners, and their founder and chairman Yvan Bourgnon.

The webinar was entitled, ‘Harnessing the potential of recreational boating against marine litter,’ and was moderated by Philip Easthill the Secretary General of EBI, who introduced Yvan as the first speaker, a man with an impressive background in multihull ocean racing and circumnavigations to his credit.

“At least 10 million tons of plastic pollution enters the oceans every year” said Yvan, “and this could become 30 million tons by 2060, if we don’t find ways to stop it!” He emphasised that in order to be successful at halting this flow, it will be important to focus on the mouths of rivers, estuaries and coastal regions where the task will be more achievable and will prevent the pollution from entering the open oceans.

As you would expect, considerable development has occurred on the design of the Sea Cleaners Manta project over the last couple of years, in order to achieve the most efficient and environmentally friendly operating vessel. Apparently some 16,000 hours has been dedicated to research and feasibility studies since 2019, and this has involved 5 research laboratories, 17 technical partners and 58 engineers / technicians.

During that time a lot of corporate sponsors from the marine industry have joined the project, not only providing funding, but also offering equipment and expertise to help towards the eventual completion of the vessel.

The vital statistics on the Manta vessel

One thing that is immediately impressive about the Manta vessel, is the sheer size of her, and when she hits the water, at some time in 2024 according to the latest project planning, it will be impossible not to notice her! 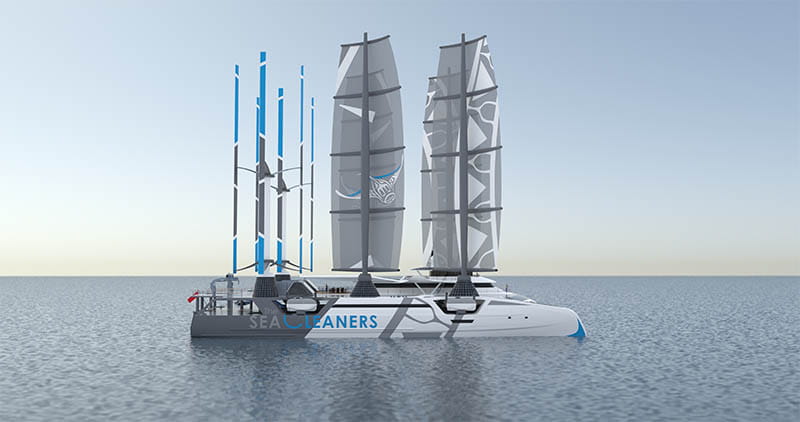 With twin hulls and two massive dyna-rig automated masts, she will be 55 metres long, 25 metres wide and 62 metres high. According to the presentation given during the webinar, the development program for the vessel has been centered around four main challenges:

How can the recreational boating industry help out with getting the Manta project into the oceans and rivers, and start cleaning up our marine environment?

Having reached the stage where the specifications are complete, and a shipyard is being sought to build the vessel, the Sea Cleaners team are inviting more sponsors to contribute skills based or product-based sponsorship. This could be for instance, technical studies into classification parameters, or provision of physical products such as: Paint Systems; Fire/Rescue/Safety equipment; electrical / batteries/ gensets; deck / navigation equipment; HVAC/ refrigeration, etc.

Another part of the webinar featured a presentation by Andreea Strachinescu, who is head of the DG Mare A1, maritime innovation unit at the EU Commission.

The commitment of the EU towards tackling damage from plastic pollution to our oceans and waterways is embedded in several clearly defined and operational directives. These include the Circular Economy Action Plan (2020), the Waste Framework Directive (2008/98/EC), the Single Use Plastic Directive (EU2019/904), and the Port Reception Facilities Directive. This is also encompassed in the European Green Deal which has amongst its targets, a “zero pollution ambition for a toxic free environment’ and ‘preservation / restoration of eco systems and biodiversity.’

In her introduction Andreea pointed out, that the millions of tons of plastic pollution entering the oceans every year is estimated to have an environmental damage cost to marine ecosystems of $13 billion US per year!

She also referred to the Copernicus Marine Environment Monitoring Service (CMEMS) which provides regular data on the physical state, variability and dynamics of the global and European ocean and marine ecosystems. As of last year, the Copernicus monitoring program is using its ocean current models to provide input (initial and forcing conditions) for plastic particle tracking models.

Raising awareness and educating about how to reduce marine plastic pollution is also an important part of the Copernicus Marine Service. To this end, they are working with Emily Penn’s ‘Round the World' sailing expeditions who are analysing plastics in the five global ocean gyres and conducting awareness sessions as they sail around. They are also supporting another organisation, 'Children for the Oceans', which is educating in schools about threats to the ocean, including plastic pollution.

Every boater can be part of the solution

Coming right down to grass roots sailors, skippers and crews, another speaker on the webinar gave an example of how local initiatives can inspire everyone with a boat to get involved in cleaning up the oceans.

Silja Teege and her husband Mike John run a well-established RYA training school called Sea Teach on the east coast of Mallorca in the sunny Balearics. She explained how they had started an initiative last year called Clean Boating, after observing the alarming increase in plastic pollution around the island’s coastline in recent years. This quickly gathered pace with interest from the local authorities and the boating community and has now been officially established as the Clean Boating Association.

The concept is simple, basically they provide boaters with nets and buckets, and some encouragement to look for floating plastic debris whenever they are underway in the harbours or around the coast of the island.  The next step was to provide shoreside facilities for emptying the ‘catch’ when the boats return to the harbours.

Silja explained how they are taking things one step at a time and are planning to expand the concept across the whole island of Mallorca, which as most people know, has a huge year-round participation in recreational boating, so a substantial potential for ‘catching plastic‘ and making the seas cleaner.

At the same time, they are exploring ways to circularise the recovered plastic, into a material that can be reused in the boating industry. And working with their connections at EBI, they are keen to eventually expand the concept into other busy boating areas around Europe.

Silja and Mike from Sea Teach and Philip from EBI are regular visitors to METSTRADE, so anyone in the marine industry who wants to speak with them about their projects might be able to catch them this November at the event!