In the spotlight: Marja Kok

Marja Kok was born in Den Helder, Netherlands, a town surrounded by water on 3 sides. Being out on the water and sailing was a way of life for her from childhood, and led to an occupation as a yacht skipper in later life. At 52 years of age, with a successful and varied career in yachting behind her, Marja decided to take an ‘environmental sabbatical’, and to dedicate her time and energy to a self-motivated and structured project. This is aimed at reducing single use drinking water bottles onboard superyachts on a voluntary basis.

Based on her own practical experience working on superyachts, Marja has compiled a well thought out survey which she named ‘Turn the Tide on Plastic, also on superyachts.’ The objective of this is to get more information about the number of single use plastic bottles on yachts, drinking habits, water filtering equipment (where used), awareness about the environment; and most importantly, willingness to improve habits onboard. It’s important to stress here, that nobody is blaming superyacht crews, owners or guests for littering the oceans with plastic. In fact, sailors are generally environmentally conscious, and many large yachts have responded very positively to the survey… more details about that later. 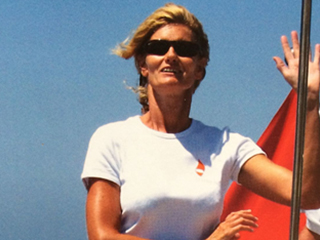 Marja studied marketing management and worked for 15 years in managing Dutch authors rights societies, whilst living on a houseboat on the River Amstel in Amsterdam. In the year 2000 at age 35, she quit her management job and started working as a skipper and flotilla leader in Greece on 45ft sailing yachts.  During this time, she met her current partner Michel, and together they bought a 44ft Jeanneau yacht which they lived aboard, sailed and chartered for seven years in the Med, Caribbean and Central America.

In 2007 Marja and Michel entered into the superyacht world when the owner of a 27 metre Jongert asked them to run his boat. This was step up in responsibility and also a step down in freedom for them, but they enjoyed it so much that they stayed for eight years, and then moved on to a 32 metre Swan when the boat was sold. 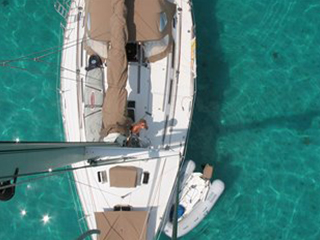 Marja says, “a live-aboard boat can become a small scale Circular Economy example, because sharing a confined space with maybe 6 guests on board forces you to live with fewer private possessions and clothes etc. Swapping books with other sailors, giving away clothes to the local less privileged people, and beach cleanups became a way of life for us.”

She also believes that a lot more can be achieved through better education, for instance making environmental sustainability part of the curriculum for yacht crew training.

Marja commented further: “My years working around superyachts made me realise that not everyone automatically thinks about the environment. For instance, overuse of water by washing boats too often, using harsh chemical cleaning products, running washing machines with half empty drums, throwing away food, not properly separating waste, and having large volumes of single use plastic bottled water onboard, these are some examples of bad habits in the industry.” 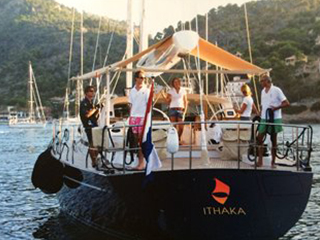 The Survey findings so far:
Up till now 99 superyachts (roughly between 1 and 2 % of the industry) have responded with a lot of very useful information.

Marja is confident of getting more survey data before releasing the full results which she will share with the METSTRADE Community later.  But already she says it’s clear that the plastic bottle footprint of superyachts is enormous! More than 43 million bottled litres a year are used, with 59 % of the crew drinking bottled water, and this rises to 81 % consumed by owners and guests.

But on the positive side, she has confirmation already that some super and mega yachts have become completely plastic bottle free!  And 95 % of the captains and crew want to seriously consider an environmentally friendly, healthy, less space consuming, and more cost-efficient type of drinking water.

Whilst gathering the survey data, Marja has also been busy contacting various producers of water filtering systems in order to analyse and compare what is available in the market today. She says that it is possible to provide good quality drinking water ‘on tap’, even taking into account the specific circumstances on-board a yacht.

Her intention is to inform all the survey respondents and anyone else who is interested about the final outcomes of the study as soon as possible.  Also, to share recommendations about how to reduce their plastic footprint, without compromising the quality of drinking water, or the service level for their owners, guests and crew. The solutions will also take cost reductions into account.

Start at the yard!
Finally, Marja would also like to make an appeal to all the shipyards to install good drinking water filtering/serving equipment as a standard procedure in the building process. She says, “to turn the tide on plastic, also on superyachts… let’s start at the yard.”

The survey
In the meantime, Marja is still keen to get more results from the survey, so if you're a yacht captain or responsible crew member please do fill in the survey which can be accessed HERE.

She would also love to hear from any superyacht owners who would be willing to use their high-profile status to endorse and increase the profile of this project, by stating that they have ordered their yacht to become ‘single use plastic bottle free’ as an example to the industry.

For more information or collaboration in environmental projects, you can contact Marja at: kokmarja@gmail.com and/or follow her on LinkedIn.