Spinlock's Lume-On light: a big idea in a small package

In this article we talk to James Hall (Marketing and Sales Manager) about Spinlock’s 2015 joint DAME Award winner, the Lume-On light and how its design was inspired by a fortunate observation when developing another product.

The DAME in 2015 was a special year for two reasons – it celebrated the 25th anniversary of the awards and was marked by the only double DAME Award ever made. It wasn’t planned that way, but after hours of deliberation the Jury remained evenly split between Humphree’s advanced Electric Stabilising Fin & Interceptor System and the relatively tiny but equally clever Lume-On life jacket light from Spinlock.

Both products have become firmly established in their respective manufacturers’ repertoires since then, but we’ve turned this month to look at the baby of the two winners to understand why such a physically small and notionally simple product made such a big impact in the marine industry.

Lume-On owes its existence to another innovative Spinlock life jacket light, the type-approved Pylon which features a stalk to place its signal higher up above the wearer for better visibility. Marketing & Sales Manager, James Hall explains: “One day when testing the Pylon, we were in a blacked-out space and the light ended up being placed next to an inflated bladder. The high visibility material started to glow in an effective way. We noted the idea, put it aside while we completed the Pylon, but came back to it around two years later because we knew it had potential."

LED light technology was moving quite quickly, becoming more powerful, smaller and with very effective use with small batteries. Spinlock realised it would be possible to create a light, which would have a big effect on an inflated bladder. Because they already had a type-approved life jacket light to use in partnership with it, they could take the concept outside of the relevant standard so that it would be cheaper and more accessible.

Development of the design through testing

“To develop Lume-On we did plenty of testing using LED lights stuck with tape to the bottom of the life jacket bladder, jumping into the water in the dark to see what the effect was and working out where to best place them. It turned out that a pair of Lume-Ons was best, one for each lung of the bladder.

“Being outside of the standard we didn’t have to be governed by the type of battery or its life, so we determined the right size for our intended purpose and ended up with one that flashes for around 10 hours duration, the first two hours at higher intensity. An encapsulated housing and adhesive rubber securing patch was then designed, with the whole R&D process taking around a year. Designing the Lume-On outside of the standard enabled Spinlock to bring it to market for around a third of the price of a compliant unit.”

Used in combination, a type-approved light provides the longer distance signal and the glow of the Lume-On bladder assisting the visibility of the casualty at shorter ranges. James recalls that real world testing revealed another unexpected benefit: “We jumped into the sea at night and put some distance between us and the rescue boat, to try and understand the effect. Even though you knew colleagues were close and were contactable on VHF radio, you became a little worried in the pitch-black water. The glowing life jacket bladder was quite a comfort – it made you feel like something was happening.”

Spinlock has enjoyed a series of successes in the DAME Awards, including an outright win in 1999 for the PX Cam Cleat as well as category wins. James recognises that it isn’t always easy portraying the benefits of a product to the judges of a competition: “With Lume-On, the product clearly spoke very loudly for itself as something that works and brings benefit to the end user, which is obviously one of the fundamentals of design. With some products we have entered, perhaps the Jury might not have understood the benefits, or maybe the entries were too technical, too early in the technology story, not explained properly, or not finished well enough."

“We're never disappointed if we don't get recognised for something. You scratch your head a bit sometimes, step back, look at what has been presented and what has been missed. We're probably still convinced by the product and believe it's got a place in the marine market but think about what we have failed to communicate that and how to address it quite quickly for the next stage of our launch. Taking part in the DAME Awards does give you lots of feedback, whatever level your entry achieves.”

There’s no arguing though that a win provides a major boost for a product and James says that the benefits come in phases. Short term – the celebration and interest from press, peers and partners at METSTRADE. Medium term – ongoing press follow-up and the ability to promote the win within a few weeks at key consumer shows like Düsseldorf and Miami. 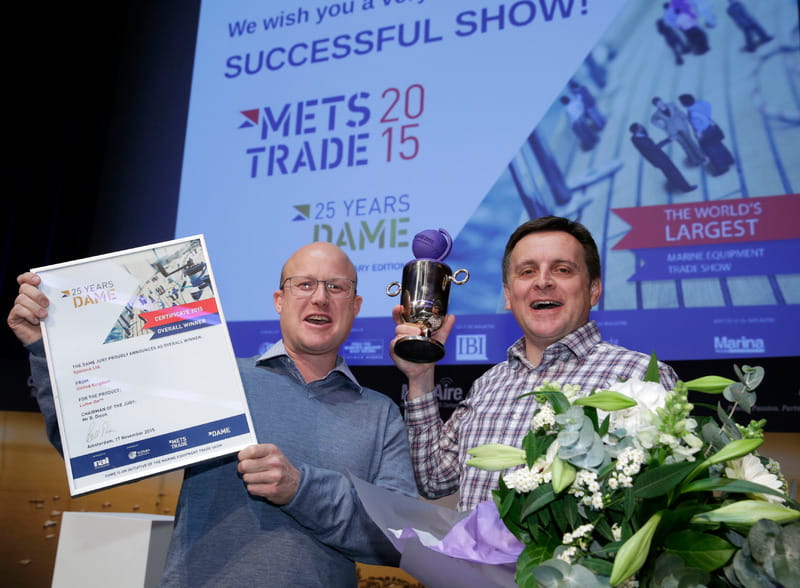 Long term, Spinlock still references the award years afterwards in its marketing, as it continues to do for Lume-On. Six years on the simple light that started life as a fortunate observation in a test room has become firmly established, as a standard enhancement to Spinlock’s premium life jackets and a popular aftermarket sales product where it is sold off the shelf for fitment to any manufacturer’s inflatable life jackets.

The need to improve user experience

We close by asking James what new customer demands are driving Spinlock’s R&D efforts: “Within the Protect side of the business we think anything that is part of a package of safety equipment that you are using should be much better integrated together. There are too many little bolt-ons, whether it be a knife, a personal locator beacon or whatever. Those things should be more a part of the system. We can do that, but it takes time to design a solution and we may need to steer respective standards to permit some changes while respecting they are in place for good reason."

“In terms of our Control and Sense equipment, we need to keep improving the user experience of being onboard a boat and taking part. Boatbuilders tell us that users want something that is intuitive, that can make boating more enjoyable and attract new people into the sport. We are focusing on how someone senses a Spinlock product when they first touch it, feel it and interact with it.”