The complexity of making something simple

Kim Hollamby talks to Nick Bice, Commercial Director of U SAFE, about the credibility gained from winning a DAME Award and the fundamental importance of user-focused design.

U SAFE entered METSTRADE scene as a new brand and product in 2019. Even before the show’s halls opened on the first day, it had taken a giant step forwards in awareness by being announced as that year’s DAME Award winner, beating 117 other entries to the top honour. In the words of the DAME Jury, this self-propelled and remote-controlled life buoy was a “perfect example of how accepted norms in the products we use can be examined and improved by great design effort.”

Although its sudden splash might have suggested a product that had arrived quickly, U SAFE had been carefully honed by designer Jorge Noras, of NORAS Performance, over several years. During its evolution a social media teaser of the prototype had gained much attention. “That video got a lot of people excited, but unfortunately views don't lead to sales.” So explains U SAFE’s Commercial Director, Nick Bice, who joined the business after seven years as Head of the Boatyard and then also Head of the Yacht Maintenance Centre for the Volvo Ocean Race. 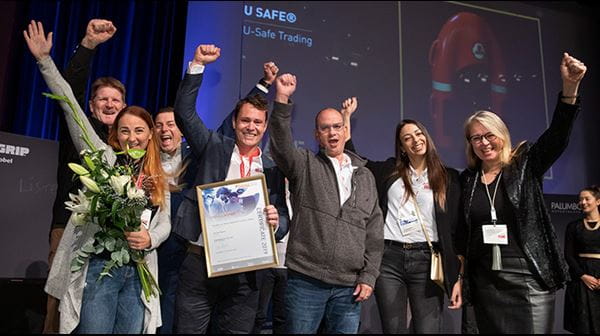 “We needed to be seen as a legitimate professional product and winning the DAME Award was our breakthrough moment. The whole marine industry, as well as many outside of it, know what the DAME is. Everyone who had seen U SAFE before thought ‘what a good idea – it's a great little toy.’ The reality is it's a tool for professionals that improves safety. Each day, surf lifesavers, firemen, coastal patrol personnel, boat crew, marina staff, coast guards and others are putting their lives in danger to save people struggling in the water and U SAFE can reduce risks for first responders. Our DAME win helped us tell that story and explain what the buoy is and does.

“When the DAME announcements commenced at the Breakfast Briefing, I was sat next to my ex-boss, Knut Frostad (President and CEO of Navico). I’d also been discussing a few things with some of the people from Garmin and Peter Harken (Harken co-founder), was sitting right behind us. These guys rightly have huge respect within the industry – to be surrounded by that calibre of individual was quite humbling.”

What no-one knew at that edition of METSTRADE was the imminent impact of COVID-19. Commercial success for U SAFE had dependencies on government interest, orders and funding, but organisations around the world had to turn to other safety concerns. Planned international travel to secure orders and develop distribution was suddenly on hold and there were other issues, as Nick explains: “Our trajectory was very strong leading into 2020 off the back of the press and publicity that the DAME win generated. It was a busy time for all of us. Then our factory in Portugal had to shut down for the pandemic and there were some raw material supply shortages too.

“We’re moving well beyond those issues now – the market is opening back up, interest in watersports has surged and the appetite is growing.  I don’t think I’ll be able to travel for some months yet, which remains a big challenge, but we’re continuing to recruit a network of country-exclusive specialist distributors to offer sales and service.”

Although U SAFE was born of a long development process, the company is very much focused on the production version that won the DAME Awards, except for enhancing its LED lighting system. We asked Nick for his perspective on the most important priority for marine equipment design, speaking from the experience of the DAME Award win and from his top-level experience of keeping the Volvo Ocean Race fleet operating in the harshest conditions. He responded without hesitation that user-friendliness is the top priority.

“There’s a lot of technology now in marine equipment. You need to be able to use it instinctively and with no more than three presses of the button. It cannot require an owner's manual of 700 pages to tell you how to make it work.

“User-focused design is often what we see highlighted with DAME Award winners, whether it's a winch from Harken, or the Garmin Force and Navico GHOST trolling motors that jointly won a category in the 2019 DAME. You can operate either of these with one press of your toe on a deck button.

“With U SAFE we undertook a complex design process to provide something that is simple for someone to deploy, even under the pressure of an emergency. You press one button, throw the buoy in the water and use the remote control to get it to the casualty. Should U SAFE flip in a wave it will keep going. Our response to protecting first responders and the lives of people who might be in trouble is to provide equipment that is super easy to use.”