I’d like to take this opportunity to thank everyone who has read and reacted to my articles this year, plus all the participants in the Sustainability panel discussions at the I-nnovation Lab Stage last month. And of course the many show visitors who attended the sessions and asked lots of interesting questions. We will definitely be repeating the formula next year, but with slightly different themes, so do please let us know what subjects you’d like to see discussed. (Via the comment box below.)

Looking forward to 2018.
During this year we have covered a lot of subjects from End-of Life Boats, to cleaner marinas, antifouling trends and alternatives, plastic in the oceans, Circular Economy developments etc, etc. But there is plenty more to talk about, and as always it's the creative and committed individuals in our industry that are driving the innovations in reaction to changing environmental demands.

So in the new year, we will be looking into several organisations that are setting great examples, and interviewing some people that are working with them.

For example, the World Sailing Organisation have launched their Sustainability targets for achievement by 2030, and the documented plans are currently going through a four month consultation phase. We’ll be talking with their Sustainability Manager Dan Reading to find out more, and will let the METSTRADE Community know all about it.

Working closely with World Sailing are two other organisations who have very positive sustainability projects underway. We will be finding out more about 11th Hour Racing from their Director of Communications Alessandra Ghezzi, and exploring how they have joined forces as co-title sponsors with Team Vestas in the Volvo Ocean Race 2017-18. In doing this they have united to advocate for sustainable solutions whilst bidding to win the race around the world.

And Go Sailing for a Change (GS4C) are just bringing to fruition their ambitious project to produce the first sustainable, ‘Cradle to Cradle,’ fully recyclable sail racing boat called the Loop650. We will be getting all the details from GS4C’s Enrico Benco, an energetic entrepreneur who has participated in previous sustainability conferences at METSTRADE.

And on the subject of ‘cleaner oceans for all’ we will put the spotlight on two people working on the Mediterranean island of Mallorca, who are engaged in raising awareness and changing habits for the good of our marine environment. Brad Robertson an Australian professional diver runs an awareness and action program about ocean sustainability via his organisation, Association Ondine .

And Marja Kok, a Dutch superyacht captain based in Palma is reaching out to her fellow captains and crew with a project to raise awareness about the use of plastic mineral water bottles onboard, and generating suggestions as to how professional yacht crews can be part of the solution to plastic pollution in our oceans.

Paris Nautic explores digital and collaborative boating.
Following METSTRADE 2017 last month, where boating industry advances in digital and sustainability concepts were given full exposure, it’s interesting to see that more content around these subjects was being presented at the Paris Nautic Boat Show earlier this month.

Organised by European Boating Industry (EBI), the French Federation of Nautical Industries (FIN) and Nautic Festival, the event featured speakers from the European Commission’s policy units, and some entrepreneurs who are exploring how the future might look with the rapid advances in digital technology, together with what has been termed as the Collaborative Economy.

It was pointed out that one of the most visible aspects of the digital change which directly affects access to boating activities, is the more frequent use of the shared economy which holds a lot of promise as a way of getting new boaters out on the water.

This graphic shows the projected growth in the Shared Economy globally up until the year 2025, based on a study carried out by PwC Analysis. It’s very easy to imagine that the leisure marine industry is destined to follow a similar trend path in the next decade. 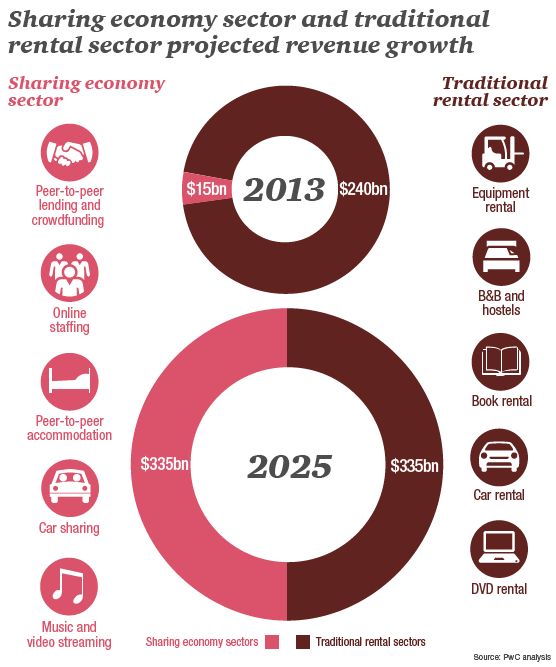 EU prepares for Digital and Shared Economy growth.
Raluca Ionescu speaking for the EU Commission (Directorate General for Internal Market, Industry, Entrepreneurship and SMEs), said that the collaborative economy has been growing very fast with a contribution of €28 billion in 2015, and revenues in five key sectors almost doubling in one year.

She stated that over half of EU citizens are now fully aware of the existence of the shared economy and that they are using it more often. Studies show that 17% of the EU population, mostly educated young people from urban areas are actively accessing services in this way.

Ioannis Kostopoulos of SaMMY app developers told the audience, “the digitalisation on land should be closely followed by the digital change on water which will better facilitate the boater’s life.”

SaMMY has developed a bespoke App which is designed to turn a regular marina into a ‘smart’ digitally connected water sports hub. Ioannis explained that the adoption of digital infrastructure is five times faster than that of electricity. He said that the yachting marina sector has to digitally gear up for the coming transition, citing that there are 50 billion “smart objects” around the world, and the number of mobile subscriptions will soon outnumber the world’s population!

So, lots to look forward to in 2018 and beyond…Wishing happy holidays to all, and a happy sustainable 2018!