‘Turning the tide on plastic’ is an expression that has captured imaginations and evoked emotions across the world, we have been following developments, and have more positive news to share here. The Great Bubble Barrier, is an idea conceived by three Amsterdam based women, who having spent most of their lives on the water, got their heads together to think about practical solutions towards reducing ocean plastic pollution.

Having seen for themselves the huge amounts of plastic and other debris that emanates from inland rivers, canals and lakes, most of which eventually ends up in the sea, their simple logic was to create a system that diverts the flow “at source,’ and literally arrests it before it becomes free in the oceans.

Three ladies have worked hard for the last couple of years to get this project to its present implementation phase.  And as it happens, Francis Zoet, Anne Marieke Eveleens, and Saskia Studer were absolutely correct in their observations, which were backed up by survey results revealed a few months ago in the Environmental Science & Technology publication. The staggering figure of 8 million metric tons of plastic debris per year that ends up in our oceans, is well documented these days, but this latest detailed study suggests that 1.5 million tons of that pours from the Yangtze River alone, into the Yellow Sea!

In fact, rivers collectively dump up to 2.75 million tons of plastic into the seas every year, and 93% of that comes from 10 of the world’s major waterways, mostly flowing in Asia and Africa.

How does the Bubble Barrier work?

Francis Zoet the Chief Technology Officer for the project explains: “We started out with the clear intention to stop the flow of plastic from rivers into oceans, without hindering marine life or shipping traffic. We knew for sure that our concept had to guarantee those prerequisites, or it would not be accepted.  So, our thought process focused on the natural elements of water and air, and following that thread, we discovered that bubble streams have worked successfully in other industrial applications, such as blocking of oil spills, and containing sediments from dredging operations.”

By placing two bubble barriers diagonally in the waterway, floating plastics are prevented from moving downstream and the natural current of the river deflects the waste to the banks on both sides. The Bubble Barrier is created simply by pumping air through a tube with holes, placed on the bottom of the river. The upward current that the bubbles generate brings the waste to the surface, and the turbulence stops the waste from flowing downstream.

The waste gathers on the side of the river, where it can easily be collected, with for example a conveyor belt. Fish can pass unobstructed through the bubbles, underneath the Bubble Tubing or through the fish slalom. The system also brings aeration to the water, increasing oxygen levels and improving the health of the ecosystem. So, in every aspect, The Great Bubble Barrier meets the important preconditions: it does not hinder marine traffic, it allows fish movement, and it does not interfere with the natural workings of the rivers and their surrounding environment. 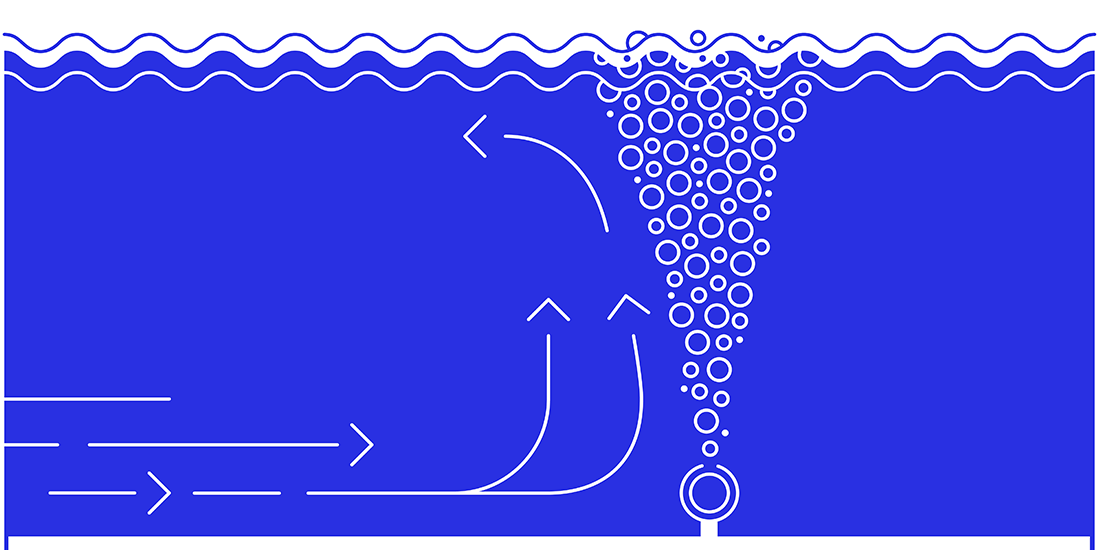 How it’s been tested

In order to prove the effectiveness of their system with the most authoritative background, Francis, Anne Marieke and Saskia presented the Bubble Barrier concept to the Netherlands ‘Rijkswaterstaat.’ This is the organisation that is responsible for the design, construction, management and maintenance of the main infrastructure facilities in the Netherlands, including the main waterway network and water systems

A significant turning point in the project development was in July 2016, when after a 3 month trial The Great Bubble Barrier won the first prize at the Plastic Free Rivers Makathon organised by PWN (Dutch water supply company) and Rijkswaterstaat. This success enabled them to plan ahead for a pilot trial in the fast flowing IJssel river which feeds into the massive IJsselmeer lake. Then, in May 2017 a practical trial was organised in collaboration with the Deltares, an independent institute for applied research in the field of water, subsurfaces and associated eco systems.

Francis Zoet said,“During the four weeks at Deltares we have tested in the Eastern Scheldt Flume with actual water and bubble barriers. There we used different plastic types, and different setups of Bubble Barriers, across a variety of testable current speeds. Then with the pilot concluded successfully, we were ready to run our first full scale pilot project in the River IJssel during real winter conditions, this commenced in November 2017.”

With the IJssel trial behind them, and a full technical report being produced in collaboration with Rijkswaterstaat, the Bubble Barrier team have just closed the first phase of their crowd funding project. This successfully raised them over 50,000 euros; enough to go ahead and set up their first permanent Bubble Barrier planned for later this year.

Francis Zoet told us that potential sites in Holland are now being evaluated, and it’s their aim to place a Bubble Barrier in one of the big Netherlands cities, or one of the rivers in the Dutch Delta.

“And after that”, said Francis, “to roll out as many as projects as possible in the Netherlands, in order to thoroughly test the system in a variety of situations. And in 2019, to go global with a particular focus on Asia, where 8 out of the 10 most polluting rivers are situated!”

Donations still welcome…
If you would like to donate to the next phase of crowd funding for the Great Bubble Barrier project roll out, please visit their website or contact them by email.

Related content:
1) Plastic in the oceans, a revolution is underway.
2) Marja Kok, turning the tide on plastic, also on superyachts.