A good number of visitors came to the I-nnovation Lab stage on the opening day of METSTRADE to hear a lively debate around the subject of End-of-Life Boats featuring a panel of experts from the industry.

Albert Willemsen the Environmental Consultant from ICOMIA opened up the session by referring to the previous two conferences dedicated to the subject at METSTRADE in 2015/16, and saying that real progress had been made as a result of more awareness of the problems, and positive actions in various countries.

Pierre Barbleu from APER boat dismantling network in France explained how the French government are introducing an Eco Tax on all newly registered boats from January 2019, and adding some government financing to create a new fund. The APER network will be able to use this money to subsidise their work, and increase the number of boats it is able to dispose of from 600 a year currently to 6000 a year from 2019.

Regarding one of the biggest challenges that our industry has had to face, with the virtually indestructible nature of GRP composite hulls, there was good news from panelist Dr Albert ten Busschen  from the polymers faculty at Windesheim University in Holland.

Albert showed the audience a sample of a remanufactured panel material which has been made from strips of composite waste from dismantled boats by combining with another resin. The material could easily replace many applications presently using wood which has a limited life span. For instance the remanufactured panels which are fully waterproof and fully recyclable at end-of-life have been successfully used in a trial to line the banks of canals in Holland, replacing the previously used African hardwood.

Jeroen van den Heuvel the membership manager from HISWA the Dutch Marine Industry Association,  said that their marina members in the Netherlands had now updated their terms and conditions for boat owners.  This gives the harbour master  the legal right to take over ownership of boats that have been abandoned for more than 6 months and to sell it to recover the cost is disposal. 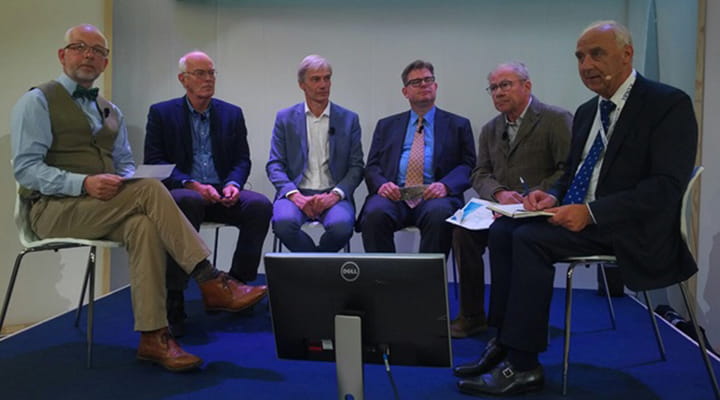 Plans are being considered for a mobile service to visit Marinas in Holland which can collect old boats and ensure that they are disposed of responsibly through approved methods.

A very successful and fully approved yacht dismantling and recycling business is already disposing of some 350 boats a year in Holland. Bootjessloperij 't Harpje in Enkhuisen run by Bram van der Pijll was mentioned several times by the panel members, who have been impressed with the operation when visiting it.

It was also mentioned that future legislation is likely to introduce the concept of 'product stewardship', meaning that boat builders would have to issue a green passport with a new yacht, and be responsible for its eventual disposable in line with circular economy principles.

Speaking for the European Boating Association representing millions of boat owners and users, Willem Dekker said that it's very unfair that the last owner of a boat, who is often the least well off, should have to be responsible for the cost of its disposal.

Willem urged all the other boating associations, user groups and various stake holders to come together and form a dedicated ELB working group. Saying that now we have some serious solutions evolving, and that joint representations to the EU Commission could be made, with plans for a more coordinated approach in future.