Princess Yachts’ co-founder, David King, has seen good times and bad in his 50 years of boatbuilding. The standing ovation he received last night when receiving his Lifetime Achievement Award at the METSTRADE and IBI organised Boat Builder Awards spoke volumes about his experience and respect in the marine industry.

In his acceptance speech David reflected, as you might expect, on the journey he took and people around him that made his success possible. He then turned to the subject of the future and, specifically, the issue of Brexit. As one of the largest employers in the South West of England, his views have real significance in the broader context of the UK, as well as to the marine industry.

"I’m not sure if Brexit will be a pantomime, a comedy of errors, or a farce – let’s hope it won’t become a tragedy. 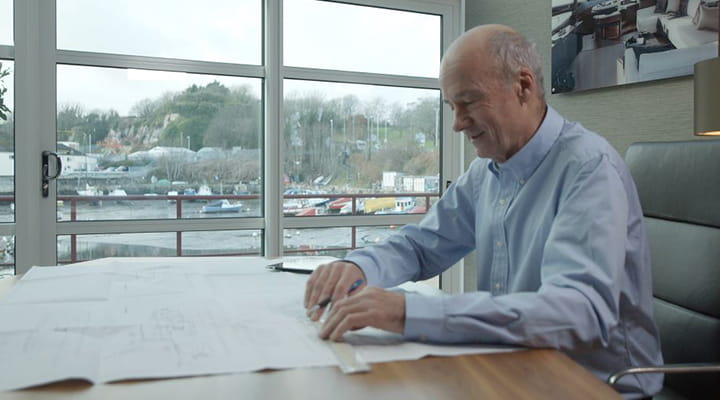 “Today obviously we face, in the UK, the massive challenge of Brexit,” David stated. “Actually, is it a massive challenge? I don’t know? Is it a Beaufort Force 2, or a Force 6 or Storm Force 12? I have no idea and I don’t suppose anyone else has any idea."

“We’ve weathered recession before and it seems to me there are three things that are so important in getting through recession: the financial strength of the company so you can stand the buffeting that the market throws at you; strong forward sales so you have some form of warning of what’s going to happen and very strong product development so that can support sales if they fall away. Those are the three things we have to focus on to get us through Brexit, through recession, through whatever.

I’m not sure if Brexit will be a pantomime, a comedy of errors, or a farce – let’s hope it won’t become a tragedy. But I think one of the great things about is the industry has always been good at working together and we have the hope that will continue, whether the UK is a part of Europe or not.”

David King’s thoughts will no doubt be shared by many UK exhibitors at METSTRADE, for whom Amsterdam has become a second home each year as they meet with their international networks and customers. There will be a variance of views of course, ranging from those advocating leave, to those (myself included) who are still angry at the decision and already mourning what we see as a very retrograde step.

In recent work I undertook with several leading UK exporters, the general sentiment was that maintaining international relationships would be paramount, whichever course the UK’s Government and its EU opposite numbers take in the exit negotiations. What we enjoy together as a global marine industry is too valuable to sacrifice on the altar of political dogma.

"Boatbuilders do have very powerful customers, they are movers and shakers, and the one thing they have in common is they are passionate about boating. We need to use their influence to get passionate about the planet."

David King did go on to remind that there are some much potentially bigger challenges ahead, much larger than Brexit, not least the environment. “It’s difficult to believe in another 50 years we will be using fossil-based fuels,” he asked. “How will we make our boats completely recyclable? How are we going to live in harmony with this planet? Al Gore is quite right, it’s an inconvenient truth that we have global warming. Around 99 per cent of people agree it is with us now."

Boatbuilders do have very powerful customers, they are movers and shakers, and the one thing they have in common is they are passionate about boating. We need to use their influence to get passionate about the planet.

"Can we find a way, as an industry, bring our marine federations together and get passionate about the planet as well? Ralph Waldo Emerson said: ‘do not go where the path may lead, go instead where there is no path and leave a trail.’”

So, the case for global co-operation remains ever stronger, a very good message to think about at METSTRADE where so many leading players in the industry gather together. Whatever happens with Brexit and, perhaps, other political turmoil around the world too, co-operation will be the key to addressing future challenges.