The role of alternative Fuels in climate change actions

Technological evolution in the marine world is nothing new. Going back centuries, sailing ships that carried cargoes across the world evolved into steam ships, and then steam finally gave way to vessels driven by diesel fueled internal combustion engines.

These technological developments were largely driven by commercial forces, basically a desire to deliver a cargo from A to B in less time or at lower cost, and therefore get a better return on the payload. So, the evolution (or transition) that we find ourselves in the middle of now is somewhat different, as its main driver is survival of the planet as we know it, which is undoubtably under serious threat if global temperature rises are not successfully capped at 1.5C.

However, the commercial implications of such major changes in technology can never be overlooked, as there is an undeniable argument that the profit motive will always be a powerful force for achieving rapid change in industrial developments.

Looking specifically at the leisure marine industry, it is interesting to see that METSTRADE show partners ICOMIA, have just recently published their own Climate Change Policy, supported by a Letter of Declaration. It states that ICOMIA member organisations such as HISWA in the Netherlands, British Marine in the UK, and NMMA in the USA have a direct influence over their national recreational marine activities and are committed to supporting a sustainable boating industry.

The policy paper is very detailed with plenty of references to well documented scientific research data about climate change. It also points out that nine major maritime associations have formed an international alliance through an unprecedented collaboration under the World Association for Waterborne Transport Infrastructure (PIANC.)

Powertrain, a look to the future

Another indication of the rapidly changing world is a recent announcement from a well-known publication regularly covering developments in marine propulsion and energy. As of last month, ‘Diesel International’ will be called ‘Powertrain’ as they have decided to rebrand their editorial platform in the name of the so-called energy transition which is being driven by the Climate Change agenda.

Looking at the definition of the word ‘Powertrain’, it’s easy to see how it has been adopted as a way of describing the combined use of several components which produce energy as a driving force, in our case to propel a boat through the water. As developing technologies are already showing, this can include batteries, fuel cells, internal combustion engines, solar, wind and hydro power, all concepts which can appear in a variety of engineered combinations.

However, Powertrain (previously Diesel International) does point out that their renaming is not based on a plan to exclude the diesel engine from their future reporting. Indeed, they make the point that there is no ‘one size fits all’ solution on the road to decarbonisation. They say that the combustion chamber must be optimised, and renewable fuels such as biodiesel, synthetic fuels, and E-fuel must all continue be improved and employed as appropriate.

In their editorial they sum up very well what I also perceive to be the current situation, judging by what I have seen in recent months. To be honest in all my years in the marine industry I have never seen such a plethora of new ideas, innovations, modifications, and a sometimes confusingly diverse array of competing concepts, around a single subject… namely, how to sustainably power the vessels of the future.

Powertrain’s view is that no single technology is likely to prevail, at least in the current decade. They say it’s more likely that fossil fuels, alternative ‘greener’ fuels, gasification, hybridisation, electrification and hydrogen will all compete in the marketplace for the foreseeable future.

The diesel engine is hanging in there

There is a viewpoint that the diesel engine as we know it, will still be around for at least another 50 years. I consider my own situation as being fairly typical for very many boat owners. My boat has a 10-year-old, reasonably well maintained Yanmar 54HP diesel engine, with only 1200 hours on the clock. It burns a miserly 2 to 2.5 litres of fuel an hour and consumes 150 to 180 litres in an average year. It is very reliable, and easy to ‘self-service’ most of the time, and I would easily expect it to go another 10 to 15 years based on current usage. So why would I even think about the investment and hassle of switching to electric or hybrid propulsion?

However, I like to think that I am environmentally conscientious. I have already switched to an electric outboard for the tender, even though it cost me more than a new 4 stroke petrol version would have done. So, quite obviously, I and maybe millions of others are target consumers for greener alternative fuels, which will hopefully enable us to continue to use existing technology, but to genuinely contribute to lower emission targets as we do so.

Last summer I got chatting to a guy tied up alongside me in a marina I was visiting, who had a motorboat about the same age and size as mine. He told me how he had recently, and happily made the change from conventional diesel to GTL (Gas to Liquid.) Basically, a synthetic diesel converted into liquid from natural gas, and one of the drop-in fuel alternatives to diesel which are now becoming more widely available.

What are the advantages of GTL? According to Shell, who have largely driven the development and availability of GTL, there are several environmental advantages over conventional diesel. For instance, it reduces NOx emissions by around 8%, and particulate matter by between 30 to 50%. And, due to a much higher cetane number it combusts twice as fast and does not produce the stinky fumes that we all associate with diesel exhaust.

Another alternative is HVO (Hydrotreated Vegetable Oil,) which is described as a renewable 2nd generation biofuel. Its characteristics are said to overcome the environmental shortcomings of the 1st generation (FAME) biodiesels. It is a paraffinic bio-based liquid fuel originating from many kinds of vegetable oils, such as rapeseed, sunflower, soybean, and palm oil, as well as animal fats, (thus the ‘renewable’ tag.) And, whilst it reduces NOx and particulate emissions in much the same way as GTL, its big advantage for the environment comes from a reduction in C02 emissions of over 80%, as compared to the GTL, which is converted from fossil derived gas.

Rather fortuitously, as I was writing this blog I got a reminder that I was booked to attend the UniQ webinar entitled ‘how to reduce the ecological footprint of a superyacht.’ This was organised by Dutch yacht builder Feadship and provided an excellent excuse to take a break and listen to some top experts for a couple of hours.

One interesting part was presented by Bram Jongepier the yard’s senior designer, who was an initiator of the YETI (Yacht Environmental Transparency Index.)

Bram explained how Feadship were committed to building yachts of the future with minimal environmental impact at both local and global levels. And although they don’t refuse to build yachts with diesel engines if the owner specifically requests them, they do try to influence them into a more sustainable specification, or at least to use renewable diesel alternatives, bearing in mind that they do come at a higher cost per litre.

He also explained very graphically how the powertrain systems and fuels currently under development such as methanol, hydrogen and battery power would impact on the space requirements in a 100 metre megayacht, if it was to be 100% zero emission, with a single energy source at full range.

By taking 30 metres of the 100-metre length for that purpose, and showing the space required on a cross sectional illustration for the various systems, it was made clear that there is much to do on development of hydrogen and battery power for superyachts, although Methanol could well be a nearer term possibility. However, this would require some engine modifications, which Caterpillar are currently working on, apparently with the potential to have one available in about three years from now.

I can’t do better by way of explanation than to share this screen shot photo which I took during Bram’s presentation. 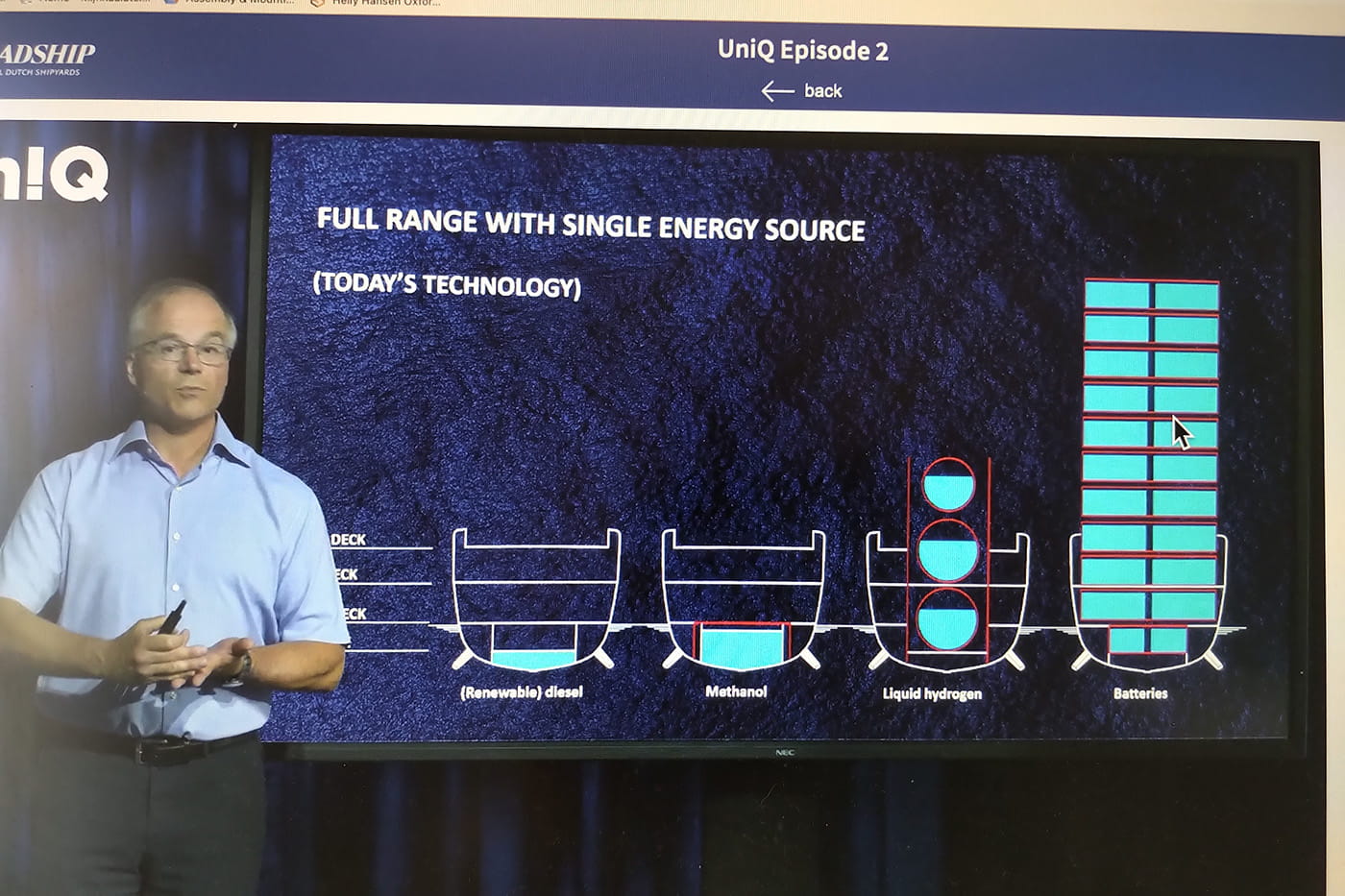 As I mentioned earlier, the pace of development in this quest for zero emission navigation is quite remarkable, and my research files are added to every day, with more and more creative and ingenious ideas and concepts. (Too much to cover in this article!)

So, I’m certain by the time METSTRADE comes around in a few months, there will be a whole lot of new items to consider and discuss, and Sustainable Powertrains and Alternative Fuels, will be one of our regular expert panel sessions at the upcoming METSTRADE. Look out for more details later…